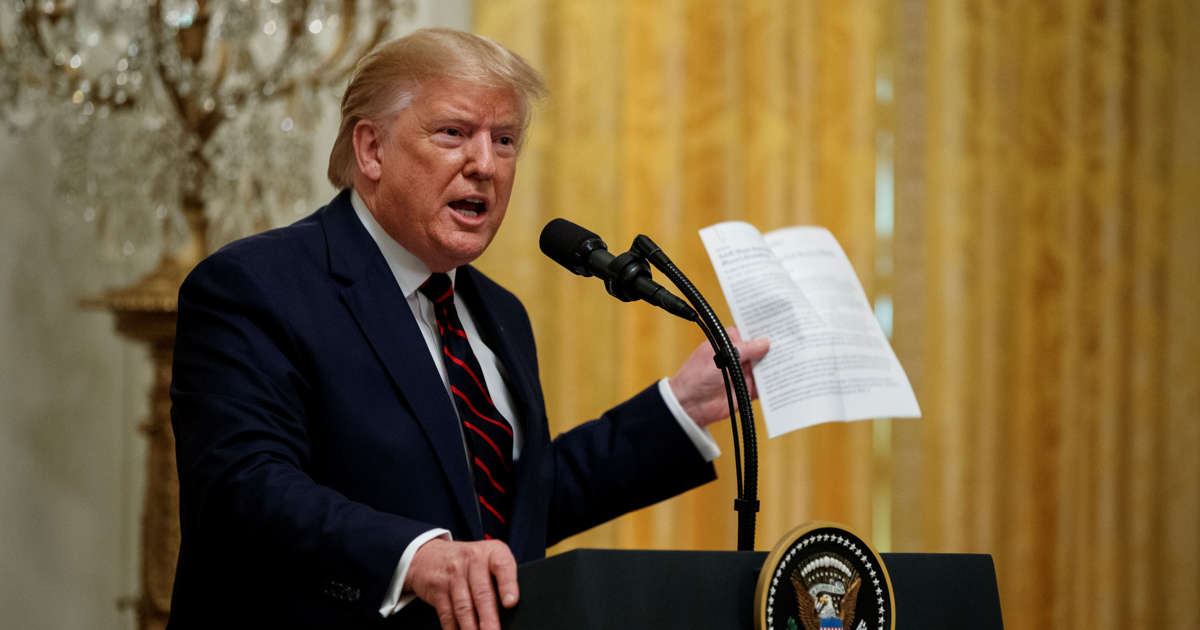 President Trump said Wednesday that his controversial July call with his Ukrainian counterpart was transcribed “word-for-word, comma-for-comma,” an assertion that fueled growing questions about the nature and completeness of an official memorandum about the call released by the White House last week.

“This is an exact word-for-word transcript of the conversation, taken by very talented stenographers,” Trump said.

White House officials previously had portrayed the document as not a verbatim transcription but rather a summary that closely tracked the words the president used in his July 25 call with Ukraine President Volodymyr Zelensky. They said it was being released in a bid to bring transparency and clarity to a call at the heart of a consuming political scandal that has sparked a House impeachment investigation.

But the whistleblower complaint that spurred the investigation described an “official word-for-word transcript” of the call — words closely matching the ones used by Trump on Wednesday — creating uncertainty about what was included in the document the White House released last week and what may have been left out.

Current and former U.S. officials studying the document pointed to several elements that, they say, indicate that the document may have been handled in an unusual way.

Those include the use of ellipses — punctuation indicating that information has been deleted for clarity or other reasons — that traditionally have not appeared in summaries of presidential calls with foreign leaders, according to the current and former officials, who spoke on the condition of anonymity to describe the elaborate, non-public process.

In two of the cases when ellipses were used, they accompanied Trump’s reference to cybersecurity firm CrowdStrike, which is at the center of a conservative conspiracy theory about a computer server central to the company’s investigation of the Russian hack of Democratic Party computers that, according to those pushing the theory, is hidden away in Ukraine.

The use of ellipses in this passage fueled questions about what may have been removed and why.

The five-page document reports Trump said, “I would like you to find out what happened with this whole situation with Ukraine, they say Crowdstrike... I guess you have one of your wealthy people... The server, they say Ukraine has it.”

In the third use of ellipses, Trump was asking Zelensky about a different theory — also sometimes aired in the extreme corners of the Internet and on some conservative news networks — that Democratic presidential candidate Joseph Biden had, while vice president, demanded the removal of a prosecutor looking to investigate Biden’s son Hunter.

“Biden went around bragging that he stopped the prosecution so if you can look into it... It sounds horrible to me,” according to the call document.

The White House declined to comment Wednesday about the unusual markings or other apparent discrepancies. Shortly after the document’s release last week, a White House official had said that the ellipses did not indicate missing words but referred to “a trailing off of a voice or pause,” and called it standard practice for records of presidential phone calls.

Current and former officials said that would be slightly different from previous practice. They said when presidents simply trail off in a way that note-takers can’t hear, that point traditionally has been marked “[inaudible]." When fragments of sentences aren’t readily understood by note-takers, or when comments repeat a previous thought, they said, the transcripts had often been marked with dashes.

Others have noted the brevity of a document purporting to represent a call that lasted 30 minutes. Sen. Angus King (I-Maine) had two of his office’s interns read the call summary aloud, measuring its length with a stopwatch app. The time: 10 minutes 40 seconds, or roughly 20 minutes shorter than the White House’s assertion about the call’s length.

“Our motivating question was: How much don't we know?” King said. “There has to be an inquiry to get to the facts."

The memorandum of Trump’s call with Zelensky appears remarkably different in speed and content from the full transcripts of calls between President Trump and foreign leaders The Washington Post obtained in 2017.

The White House summary of Trump’s 30-minute call with Zelensky — which included interpreters because Zelensky spoke Ukrainian while Trump spoke English — includes fewer than 2,000 words, or roughly 65 words per minute. That suggests that the rough transcript of the Zelensky call includes about half the number of words that would be expected if the call had proceeded at the same or similar pace as the previous calls.

It was unclear whether the interpretation of the Zelensky call occurred simultaneously as the presidents were speaking or took place after a participant had finished speaking. The latter would have affected the speed of the conversation.

(Neither the Turnbull nor the Peña Nieto transcript included ellipses.)

The record of the presidential call with Zelensky, which is labeled “MEMORANDUM OF TELEPHONE CONVERSATION,” was marked as having been produced by note-takers in the White House Situation Room, as is standard for calls with foreign leaders. The record, however, is unusual for lacking a tracking number that would normally indicate it had been circulated to senior subject experts and the national security adviser’s office for review and edits. Instead of a “package” number, the memo released by the White House carries a stamp saying: “PkgNumberShort.”

The document additionally carries classification markings that Situation Room staffers do not normally add when they create a word-for-word transcript, current and former officials said.

“I thought to myself, ‘This didn’t go through the normal process,’ ” said one former government official who was among several who handled these records and found the document released by the White House curious.

The whistleblower said in his complaint that multiple U.S. officials had alerted him that “senior White House officials had intervened to ‘lock down’ all records of the phone call, especially the official word-for-word transcript of the call that was produced — as is customary — by the White House Situation Room. This set of actions underscored to me that White House officials understood the gravity of what had transpired in the call.“

Such phone calls also typically create at least two types of documents: a verbatim transcript made by note-takers in the White House Situation Room and an edited summary that is more widely circulated.

“The one that was released is not the one the Situation Room created,” said one person familiar with the creation of records of calls with foreign leaders who spoke on the condition of anonymity to discuss the secretive process. “That’s just not possible.”