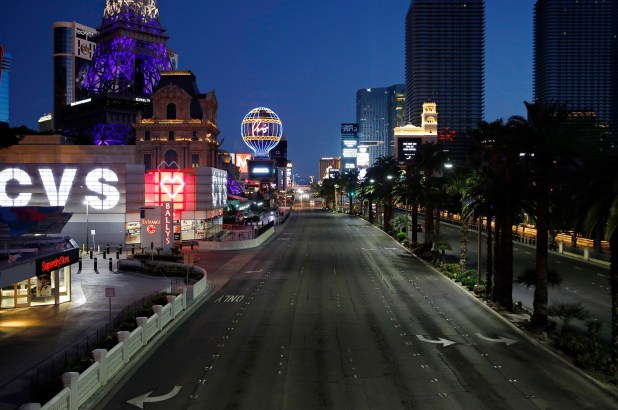 There’s no pole dancing during a pandemic.

“Sorry, we’re clothed,” reads the digital signet outside Little Darlings, a now-shuttered Las Vegas strip club that had stubbornly tried to remain open early on in the coronavirus outbreak.

The fully nude jiggle joint had tried to stay afloat by advertising “coronavirus-free” dancers, nude hand sanitizer wrestling and drive-thru strip shows — but to no avail.

The club sits just off a Vegas Strip that is now stripped of life.

The entirety of the famed boulevard has been shut down for the first time since the assassination of John F. Kennedy, according to The Guardian.

Like the nearly completely desolate Times Square, the abandoned Strip is a haunting illustration of an invisible pandemic.

The closures are expected to devastate the state’s economy.

The Nevada Resort Association penned a letter to Congress asking for federal relief. The group estimated last month has warned the state has lost an estimated $2 billion from canceled meetings and conventions, the Las Vegas Review-Journal reported.

The shuttered strip could lead to nearly $39 billion in economic losses, the group said.

“This is an unprecedented economic situation that will have catastrophic financial ramifications for individuals, families, businesses and state and local budgets across the state,” the association’s President and CEO Virginia Valentine, wrote in the letter.